Cleveland AIM has maintained the original principals of self-determination set forth by the founders of the American Indian Movement: sovereignty, spirituality, solidarity, and sobriety. We are a member of the American Indian Movement International Confederation of Autonomous Chapters. As a Traditional Warrior Society, we promote, protect and preserve traditional cultures, values and lifestyles, and ensure justice for indigenous peoples.

In the promotion of healthy Native communities through education and activism, Cleveland A.I.M. has led the fight against American Indian caricatures and mascots.

In January 1972, Cleveland A.I.M. sued Cleveland Baseball for libel and slander, in an unsuccessful effort to change the “Cleveland Indians” team name and abolish its shameful, racist dead-Indian-head logo “Chief Wahoo”. Through our Campaign for Dignity, we have demonstrated at every Cleveland Baseball Home Opener since 1973.

In 1995, we sued Gateway Corporation, who manages the stadium where Cleveland Baseball plays, for violating our civil and legal right to speak on property paid for with tax-payer money (in other words, "public property"). Their attempt to squash our demonstrations failed, and we continue to protest at every Opening Day. We will continue to pursue all avenues of disruption until the Little Red Sambo “Wahoo“ has gone the way of “Little Black Sambo“ and the “Frito Bandito“, and Cleveland Baseball changes its exploitive "Indians" name.

In 1999, we filed a civil rights complaint against "Cleveland Indians" baseball with the Ohio Commission on Civil Rights, who ruled that, because we are not barred from entering the stadium as American Indians, discrimination at the stadium does not exist.

Our fight in Ohio does not end there. We are also active in communities across Ohio who are trying to convince their School Boards of Education that Native-related mascots are discriminatory, exploitive, misleading, and perpetuates genocide.

In 2007, after a year-long effort working with local Natives and other activists, we successfully petitioned Oberlin School Board (Oberlin, Ohio) to change its district's “Oberlin Indians” team name and Indian-head mascot. Our Campaign for Dignity in Education is focusing on eliminating the use of bigoted and racist imagery in secondary education throughout Ohio.

More information on our campaigns, factual history of the American Indian Movement, and other resources we offer can be found on this website, as well as our meeting schedule, membership and volunteer information. 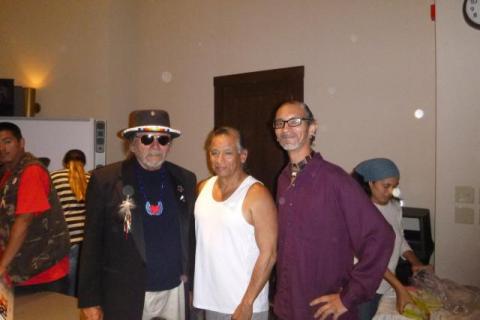