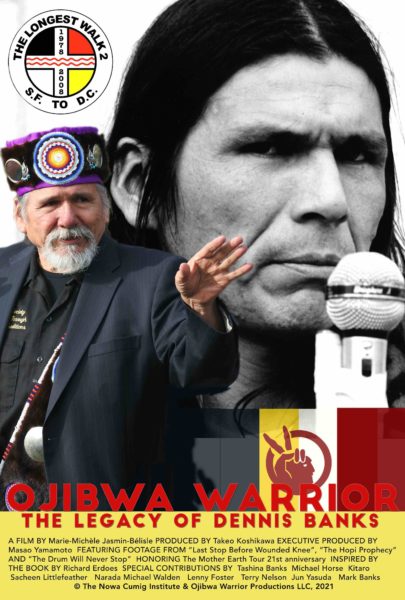 The taking of Alcatraz, the Custer Riots, the B. I. A. takeover, and the Wounded Knee siege are all events that have since marked the rise of indigenous rights in the United States. Leonard Peltier, Floyd Red Crow Westerman, Russell Means, the Bellecourt brothers, Sacheen Littlefeather… all names that would go down in the history books. But where did Dennis Banks – or Nowa Cumig – get this fire to lead the fight? What came before these events, and most importantly what followed them?

This film endeavors to look at the bigger picture by opening the door into the life of one of the most influential men in Native American history, using archival footage from films such as LAST STOP AT WOUNDED KNEE, THE DRUM WILL NEVER STOP, and THE HOPI PROPHECY, as well as photographs by Richard Erdoes and excerpts from his and Dennis’ book the Ojibwa Warrior”. The film is narrated by actor, artist and activist Michael Horse.

“What Really Happened at Standing Rock | I Was There“.
Directed by Gabriela Dematteis.
13:11 mins.

In 2016, indigenous water protectors and their allies gathered at Standing Rock to oppose the construction of the Dakota Access Pipeline under Lake Oahe and the Missouri River. Chase Iron Eyes, a member of the Great Sioux Nation and Lead Counsel for the Lakota People’s Law Project, was one of those water protectors. Through his personal testimony and supporting protest footage, Chase recounts his experience at Standing Rock and its lasting legacy.

$15.00.  Public is welcome! No one turned away for lack of funds. FREE OR DISCOUNTED FOR MEMBERS.

Reminder: The Roxie continues to operate at a 50% capacity limit. Purchasing your tickets in advance is enthusiastically recommended! For more info, email info@Roxie.com. Health and safety are our priority. Please read our health and safety protocols and precautions. STARTING 8/20, IN ACCORDANCE WITH SAN FRANCISCO’S SAFER RETURN TOGETHER ORDER, WE ARE REQUIRING PROOF OF VACCINATION FOR ENTRY. WE THANK YOU FOR YOUR COOPERATION.

This is a benefit for AIM-West, an inter-tribal human rights & treaty rights based organization in San Francisco, established in November of 2007.